I’m going to be really honest here, college is coming (less than 2 months! Woohoo!) and I couldn’t be more excited, but I also can’t help but feel Mr. Fear sneaking up to ruin it all.

I’d been feeling the usual anxiety symptoms (racing heart, sleepless nights, cold sweat, unable to catch my breath all while doing nothing, I might add) and wondering “where are these coming from?” It’s summer! Life is good. My biggest worry, is what I’m going to do with the girls I’m nannying today. No need for these pesky anxieties to be around. But one thing I’ve learned is this: anxiety can come when you least expect it & it’s always trying to tell you something about your heart.

I ignored it, until it randomly overtook me in a familiar office and I was encouraged by a friendly face to dig deeper. Anxiety is never surface deep. So dig I did with my trusty guide.

The digging wasn’t pretty but, boy oh boy, was it needed! After years of trying to put this fear to rest, the fear that left me spiraling out of control, here it is again.

We dug up this: What if I fail?

Those words came slowly. As I realized they were behind the anxiety (again!) I didn’t want to admit them. But they won’t go away until I admit them, so I let them out softly.

Admitting those words hurt more than I can say because I’ve worked hard to put my past where it belongs, the past.  But I’m only human and for all of my trying, I fail even at putting my “failures” behind me.

That shadowy figure on my shoulder peers over into my present and future, speaking lies that I subconsciously believe until I’m jarred awake by this: The LORD is within me. I will NOT fail because HE does NOT fail.

The lady guide in the chair across the way spoke them over me and I felt them deep. She’s right.

It’s that simple. It’s that complex and that deep. It’s that real. No failure in Jesus Christ.

•the worst may happen in life, but His salvation is forever & His righteousness will never fail (Isaiah 51:6) 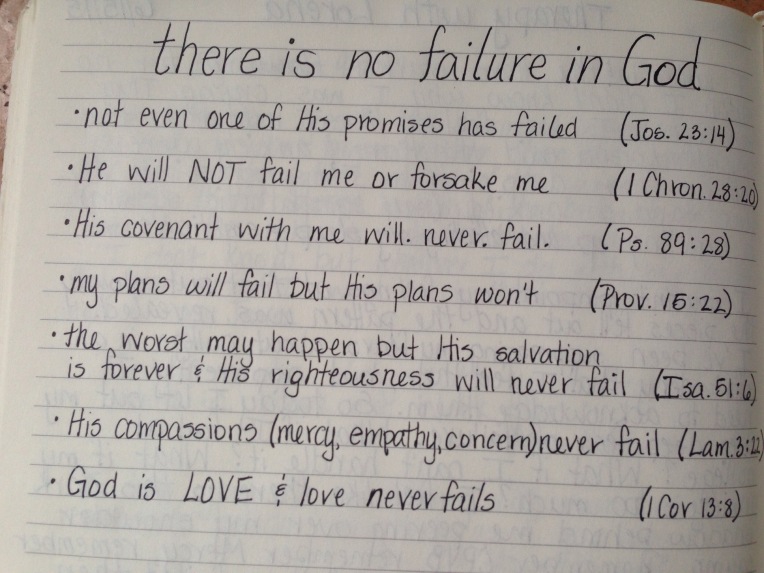 One thought on “Because HE Never Fails”